In Part 4, we looked at how using docker compose centralized the orchestration of the containers for our application. We learned about .yml files how to use docker compose up.

If you recall from Part 1, one of my goals was to offload the infrastructure required by NServiceBus's persistence and transport needs to Azure so I could focus on learning Docker and containerizing the solution. Now that I've made some head-way, I'll re-focus on using Sql Persistence instead of Azure Storage Persistence for NServiceBus persistence.

Changes to the Solution

Opening the solution up you'll see the Global.asax and EndpointConfig.cs files have been updated to use SqlPersistence. Here is an excerpt of that config code from both files:

The only difference in the two files is in the EndpointConfig.cs file which makes this call:

which takes care of checking if the database exists, and if it doesn't, creates the database with the correct schema to set up Sql Persistence. The supporting NuGet packages have also been added that allow the usage of Sql Server as the persistence mechanism.

because of the order in which the containers are started, with the MVC container being last, I opted to check for the existence of the database from the endpoint project. This is because the endpoint container is started before the mvc container, so we only need to make the check once in this specific case.

To illustrate how splitting the needs of NServiceBus transport (currently being handled by Azure Storage Queues) and NServiceBus Persistence (Sql Persistence) impacts the technical artifacts created by each respective technology, I've opted to add a new event, TestEvent, that is published at the end of TestCommandHandler, and handled in new handler, TestEventHandler.

Adding TestEvent requires a subscription to be registered in the EndpointConfig.cs class for that event, which is handled in a same endpoint from which it is published. Using NServiceBus's Message Routing, I register a publisher of type TestEvent for the publishing endpoint, "NSB6SelfHostedClientMVC.Handlers":

I'll demonstrate later how this message routing turns into a database entry in the table created by Sql Persistence.

Now that we have Sql Persistence set up, we need to find a way to containerize a Sql Server instance and have that instance available to NServiceBus to use for its persistence needs.

To containerize Sql Server, I choose to use the microsoft/mssql-server-windows-developer image on DockerHub which pretty much gave me a running head start. After reading through some specifics, I settled on running a container from that image like follows:

That's a good amount of parameters. Let's examine them one at a time:

Let's go ahead and run this image in a container. Execute:

After running the command you should see the id of the container returned to the console:

Get the IP address of the running container by executing:
docker inspect --format="{{range .NetworkSettings.Networks}}{{.IPAddress}}{{end}}" sql

and fire up Sql Server Management Studio. Once SSMS opens, paste in the IP and the password used when starting the container. You should be able to connect to the sql server instance in the container. 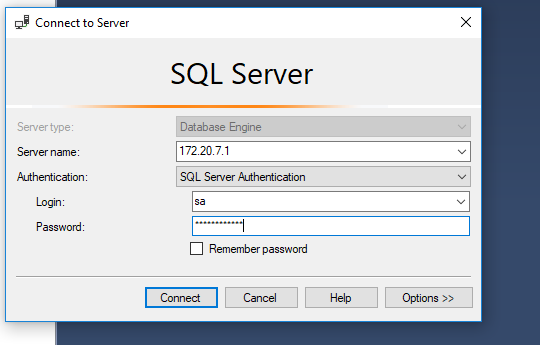 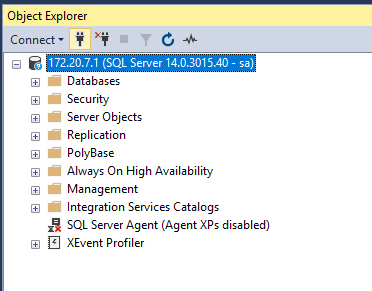 to stop the container, issue:

to remove the image, issue:

So far, we've changed persistence and containerized a sql server instance. Now let's coordinate these docker containers in order to run our application.

My first attempt at using docker compose for coordinating all three containers ended up failing, so if you're not interested in reading about why it failed and would rather jump forward to the part that did work, proceed to that section now

Here is what the .yml file looked like at the point I tried to take this approach: 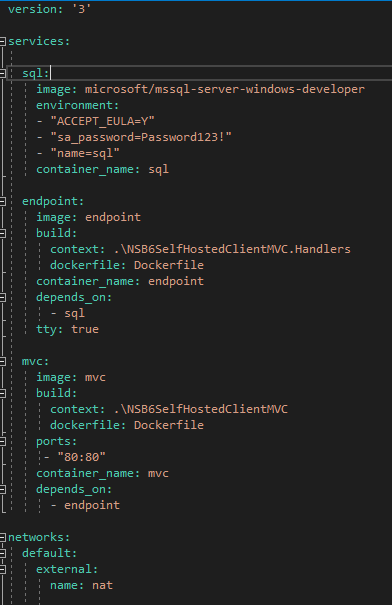 There are some new items added to the yml file:

For the added sql section, you can see that we're passing in the same information we passed to docker run when running the image directly from the console. In the .yml file, we're saying we want to use the microsoft/mssql-server-windows-developer image directly, and then passing in all of the variables using the environment sub-node as well as naming the container sql

With the new .yml file in place, I dropped to the command line and issued:

and received the following exception:

Since docker-compose builds all the images first and THEN start all containers, and since there seemed to be no way to run a docker container before building the other images by using the .yml file, I could not find a way to get the running sql server container I needed.

Time for plan B.

I needed a way to execute docker run on the microsoft/mssql-server-windows-developer image to get a running sql server container before executing docker-compose up -d, which would build both my endpoint and mvc images, and then start running containers for each.

With this new approach, let's revisit the .yml file: 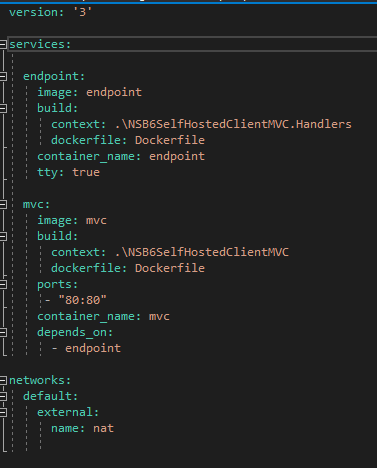 The .yml file looks almost exactly the same as it did in Part 4, except for the addition of the networks node, which I covered in the Docker Compose section.

StartApplication.ps1 uses docker run to directly run a container from the microsoft/mssql-server-windows-developer image, passing in all the parameters we did when initially running it near the beginning of this post. It then calls docker-compose up -d which builds the images and starts the containers specified in our .yml file.

Executing .\StartApplication.ps1 should result in output similar to this: 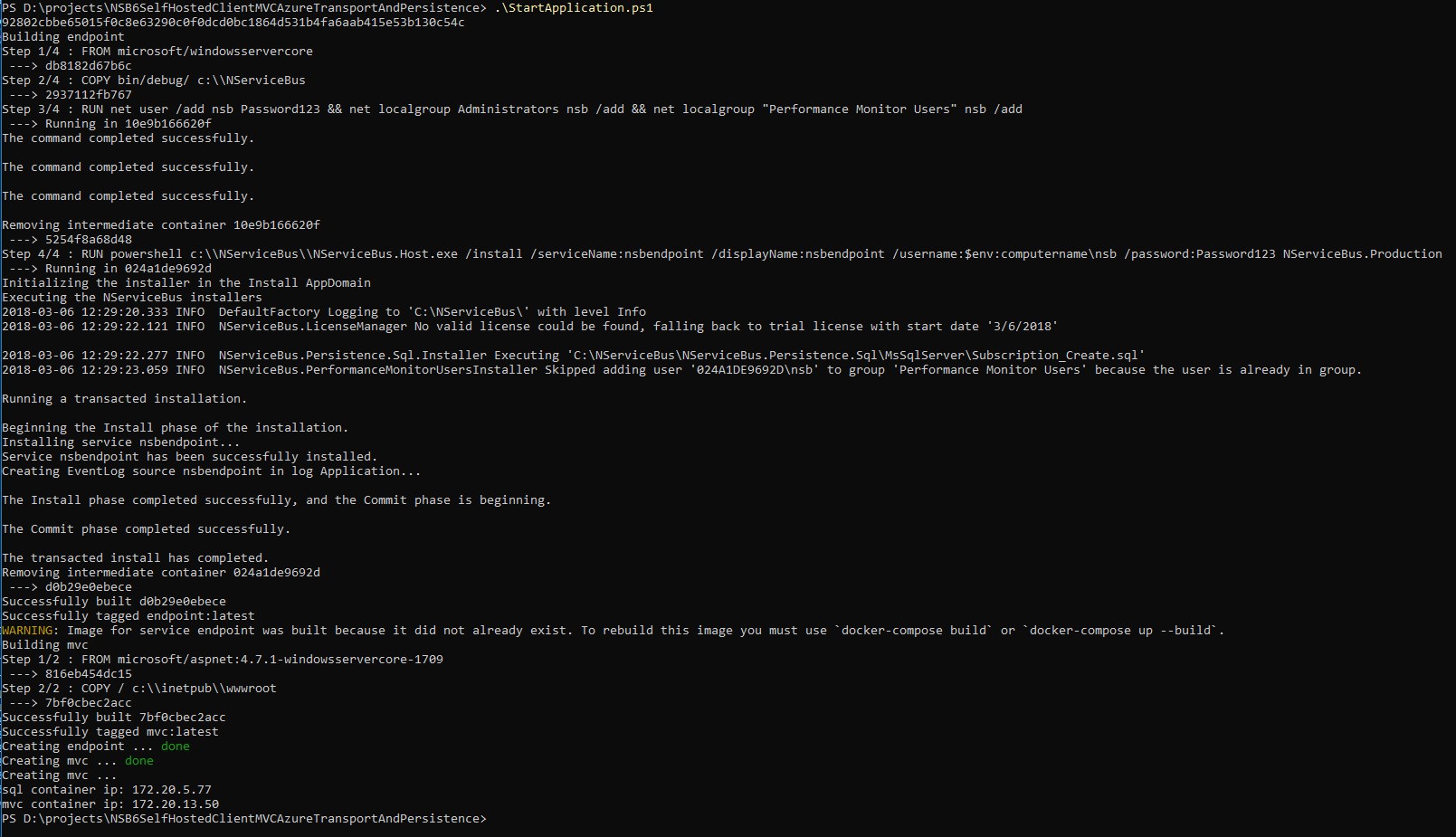 In the first line, the id of the sql server container is returned to the console, then the PowerShell script executes docker-compose up -d which creates the endpoint and mvc images and then starts those containers.

The last two lines contain the IP address of both the mvc container as well as the sql container so you don't have to execute this for each container:
docker inspect --format="{{range .NetworkSettings.Networks}}{{.IPAddress}}{{end}}" [CONTAINER ID]

After the script is done executing, you can now see all three running containers by issuing
docker ps:

You can see the sql server persistence table created by the endpoint container by using the sql container ip output at the end of the .\StartApplication.ps1 script and logging into SSMS:

You can test the mvc container is reachable and sends a command that is successfully handled by the endpoint container using the mvc container ip output at the end of the .\StartApplication.ps1 script, opening your browser and pasting the IP address into the address bar. 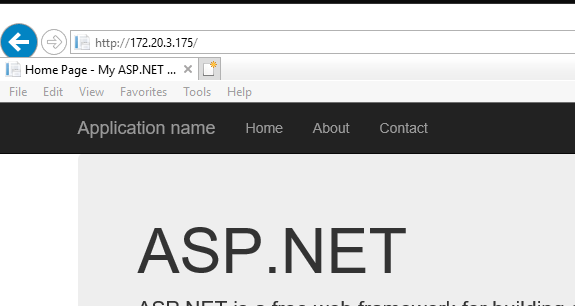 to put yourself on the endpoint container's command line. cd to the NServiceBus directory then issue a dir. You'll see the nsb log file that will have the output of the handlers that have handled their messages.

The bottom two lines show that TestCommand was handled as well as TestEvent.

Now that we've made it so easy to start our application, it would be a shame to stop there. Let's make it easy to stop it as well.

Because docker-compose down does not remove images that were created as part of docker-compose up, we need to manually remove both the mvc and endpoint images as well.

Again, using user-friendly names for your containers helps make cleanup like this much easier

In this post, we migrated NServiceBus persistence away from Azure Storage Persistence to Sql Persistence, containerized a sql server instance, and used PowerShell to coordinate docker run with docker-compose to create three containers which run our NServiceBus application.

Future posts in this series might include migrating to MSMQ as the NServiceBus transport (when it becomes available as part of the stable microsoft/aspnet:4.7.1-windowsservercore image on DockerHub) and/or deploying this application to the cloud in with Docker Swarm or Kubernetes. 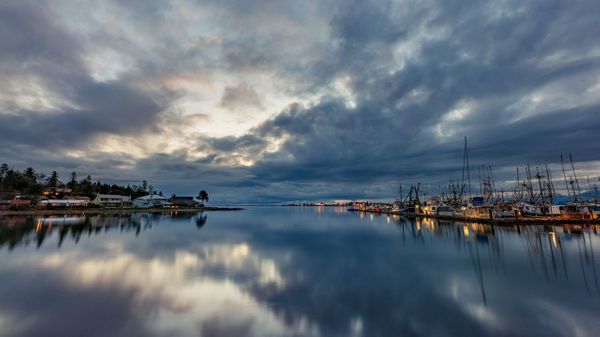 This post is the first in a series on how to code, build, deploy and run an NServiceBus endpoint in Azure App Services. 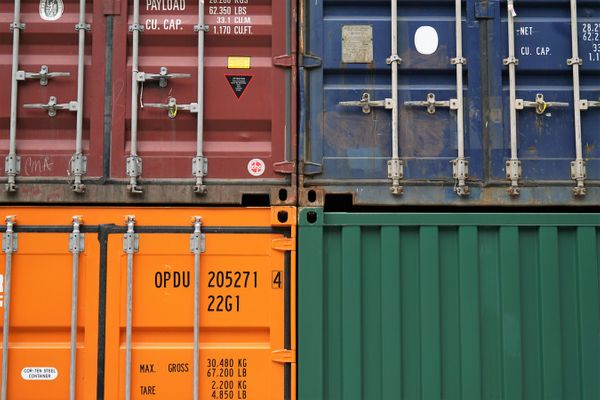