Posts in this Series:

In Part 2, we used Visual Studio's Publish feature to deploy our NServiceBus endpoint to an Azure App Service, and after only one manual change in the Azure Portal, saw our endpoint successfully running by viewing the app service logs.

As easy and convenient as Visual Studio Publish is to use, there are two problems with it.

First, using Visual Studio publish feels a bit like this 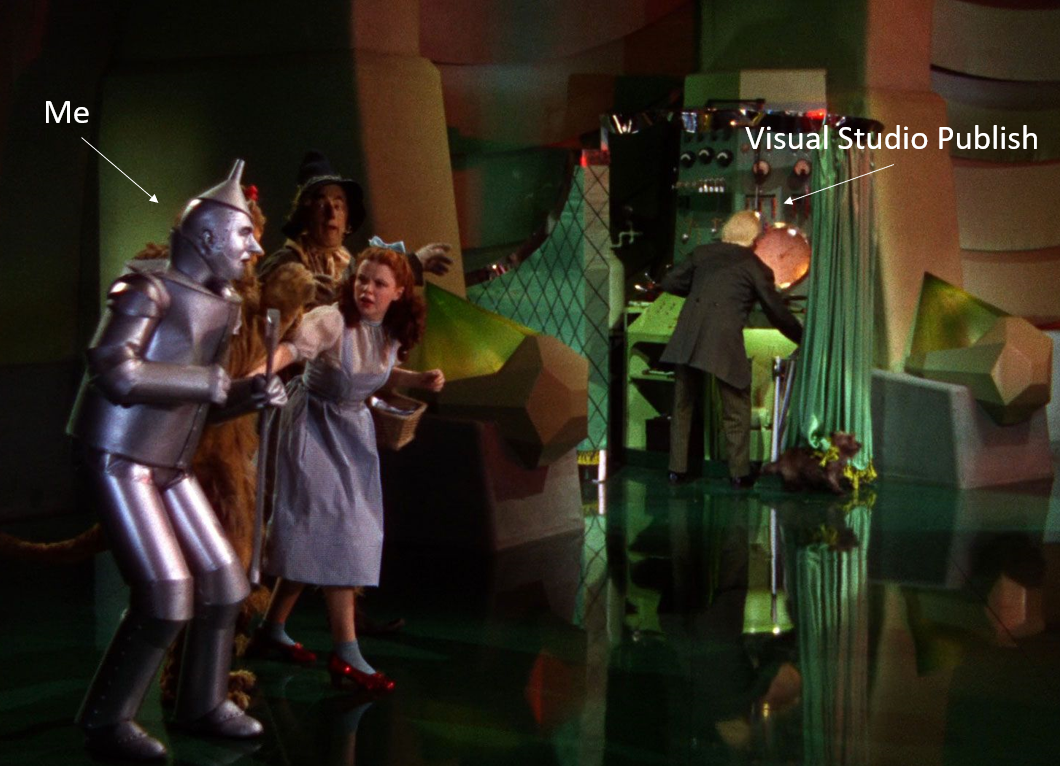 There is a lot going on "behind the curtain" that we're taking for granted which is allowing us to move very quickly (which is good), but with little to no knowledge of what's actually going on (which is bad).

Second, to graduate beyond demo-ware deployment, we need to understand what Visual Studio Publish is actually doing. Why? We'll need that knowledge to implement a more robust deployment solution like Azure DevOps because in most real-world projects

In this post, we'll be pulling back the curtain on Visual Studio Publish to examine what's happening in your local solution and in Azure.

We won't be making any code changes in this post in the series, so I won't be providing a Part 3 branch on GitHub repo. Also, if you haven't completed the work in Part 2, where Visual Studio Publish provisions Azure resources, you won't be able to follow along with the end of this post.

If you've already completed Part 2, you can feel free to grab the code for Part 2 here.

Visual Studio publish added two artifacts to the project. Settings.job and a PublishProfiles folder with two files in it. 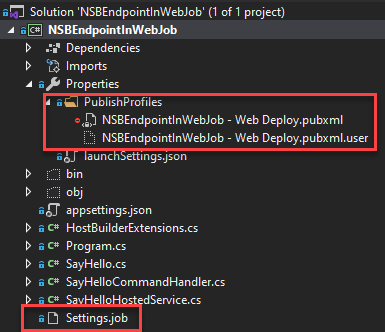 The Settings.job file has examples of CRON expressions that can be used for Triggered WebJobs.

Since our WebJob is Continuous, this file won't be used and you can ignore it.

In this file, you'll see some of the settings we supplied when we initially published the project like <WebJobType> set to Continuous. The file also tells us Visual Studio is using MSDeploy (aka, Web Deploy) to deploy our project to Azure.

The <_SavePWD> setting is set to true, but where is it saved? In the NSBEndpointInWebJob - Web Deploy.pubxml.user file.

The .pubxml file can be modified to customize the build and publish process after it's been created by Visual Studio. You can edit the file directly or still use the Publish editor in Visual Studio to change values in the file. You can also create multiple publishing profiles (for instance, one for each of your environments).

Also, you don't need Visual Studio to deploy your project to Azure. You can do that from the command line and pass it the publish profile.

Because both publish files contain sensitive information, neither should be checked into source control.

In Part 2, when we clicked the "Publish" button there was a lot of output generated in the Build Output window in Visual Studio. Some of the secrets to publishing a WebJob to an app service are in this output. The output is quite lengthy, so I'll be focusing on the most important parts of it that will show us what the Publish process is doing behind the scenes.

The "Magic Path" to WebJobs

More specifically, this sub-section from the path above is the magic path to where WebJobs need to live in the app service

If our WebJob was Triggered, the path would contain \Triggered instead of \Continous.

Next, the publish process adds each directory until it builds the full WebJob path

Then, each file required for deployment is added to that path

But what actually invokes the WebJob? The answer is in this line of output

No, not these guys 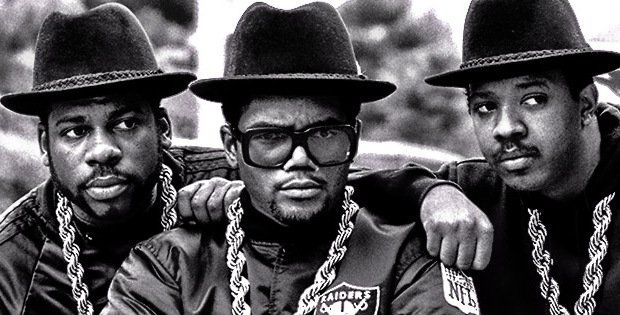 Run.cmd is a file that is auto-generated by Visual Studio Publish. It's a directive to the app service to start a command prompt and run something. But what is it running? It's running the binary output of our project which is the WebJob.

Without this file, the WebJob will have no way to be discovered or run. Visual Studio Publish is nice enough to generate it for us instead of relying on us to add a run.cmd file in our project.

At the end of Part 2, we shut down our Azure resources so we would not get any nasty billing surprises. We used the Azure CLI in Cloud Shell to make that happen. In order to explore the Azure artifacts that were created when we deployed in Part 2, we need to start those resources again.

Once your Cloud Shell session is running, we'll restart the Azure resources

Change App Service Plan to B1

Before we turn our app service back on and set it to Always On, we first need to change the service plan to the B1 pricing tier.

Now that our service plan is running in a pricing tier that will allow us to run the app service in Always On, we can set the app service to Always On. Copy and paste the following PowerShell code into Cloud Shell replacing NAME_OF_YOUR_APP_SERVICE with your unique app service name.

and then start the app service

With our Azure resources up and running, you should be able to go the app service's WebJobs menu item in the Azure Portal, click on the WebJob menu item and then view the Logs to make sure the endpoint is running (you can refer to Part 2 of this series for the specifics).

Besides the Azure resources that were provisioned by Visual Studio Publish (storage account, app service plan and app service) what was actually deployed to the app service? Let's take a look.

Open the Azure Portal and go to your app service. Type console in the search field and then click on the "Console" menu item

Type dir and you'll see the first folder in the WebJob path, app_data

Then type dir and you should see a list of all deployed artifacts. 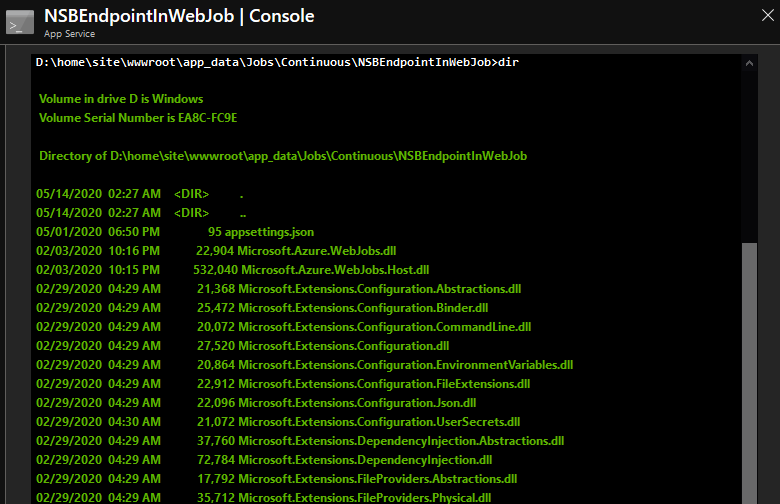 Scrolling through the list, you should see appsettings.json, Settings.job, run.cmd and the rest of the .dll's that were deployed with your project

Let's take a look at the contents of run.cmd. Type more run.cmd. You should see the following output

The contents of the file uses the dotnet command to run the compiled binary that is your WebJob, which hosts the NServiceBus endpoint.

Just like like last post, we want to shut down and clean up our Azure resources. But we're going to add a new step, which is deleting all the files and folders under the app_data directory in the web root to give us a "clean slate" to deploy our NServiceBus endpoint using Azure DevOps in Part 4.

Return to the Console of the app service and make sure the path is D:\home\site\wwwroot when you open it. Type the following command

This command will delete the app_data folder and all folders and files in it. Basically, we're deleting our NServiceBus endpoint.

Next, let's shut down and clean up our Azure resources. Enter the following Azure CLI commands one after another in Cloud Shell replacing NAME_OF_YOUR_APP_SERVICE and NAME_OF_YOUR_STORAGE_ACCOUNT with your app service and storage account name.

In this post, we did a deep dive into the mechanics behind Visual Studio Publish. We learned about Publish Profiles, Web Deploy and the specific artifacts and conventions required in order to deploy a WebJob successfully to an Azure app service. We re-started our Azure resources and used the app service console to take a look at the generated folders and files created by Visual Studio Publish to host our NServiceBus endpoint.

In Part 4, the final part of this series, we'll be putting our newfound knowledge into action as we create a build and deployment pipeline for our project using Azure DevOps. 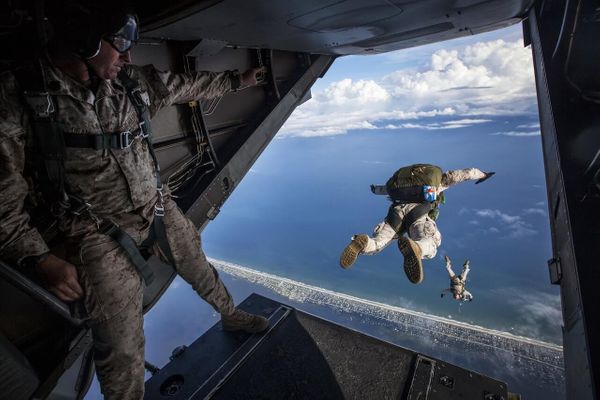 In Part 3, we pulled back the curtain on Visual Studio Publish to gain insight into what it was doing in order to deploy our NServiceBus endpoint to Azure. Using that newfound knowledge, we'll be "graduating" from right-click/Publish to Azure DevOps. 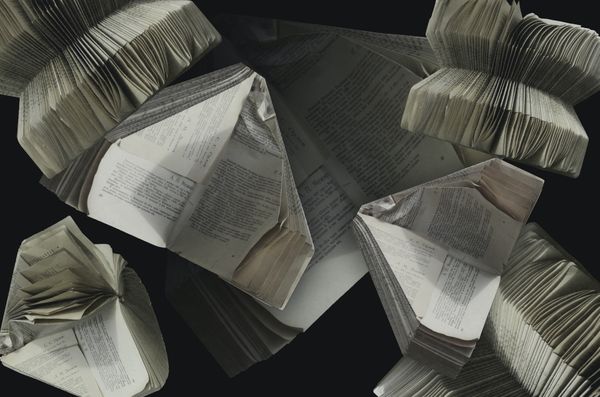 In the last post we coded an NServiceBus endpoint running in a hosted service in the .NET Core generic host. We ran the endpoint locally and saw its log output written to the console. In this post, we'll be deploying our NServiceBus endpoint to Azure using Visual Studio Publish.