I'm usually not the type of person who gets excited about about features that are still in preview, or someone who writes blog posts about technology that I haven't used at scale, but today I'm not that person ;)

Today, I am super-excited about Bicep, a language for declaratively deploying Azure resources.

If you've been working with ARM templates and/or the Azure CLI to provision Azure resources, read on to see how Bicep can up your DevOps game.

For someone like me who has been using the Azure CLI to provision Azure resources, who gets a headache every time I look at an ARM template, and just doesn't have the time (nor the motivation) to learn Terraform, Bicep is a welcome addition to the current options offered up by Azure DevOps.

If you're tired of scrolling through ARM files that are hundreds of lines long, dealing with clunky syntax for parameters and string concatenation, and the overall "noise" of json, then Bicep is for you.

In this post, I'm going to walk you through a super-simple example of how to provision Azure resources using Bicep.

When you have everything in place, you can start to use Bicep.

Start by creating a main.bicep file, which will "orchestrate" the provisioning of the three resources:

Starting at the top of the file, namePrefix is a variable that I'll prefix all my resource names with. targetScope defines in which scope Bicep will run. You can check out the list of available scopes here. If omitted, the scope default is resourceGroup

Now we get into the actual provisioning work. The first resource to create is the Resource Group

Let's break this file down starting with the first line.

Looking at the first line

Now that we know how to use the module keyword, create a new file called appServicePlan.bicep in the same directory as main.bicep file. This is the file that will do the App Service Plan provisioning work.

The two param values at the top are passed to the prefixName and sku properties from the main.bicep file. Name and location are required values (enforced by Visual Studio Code's intellisense). Again, we see the resource keyword at work.

The location parameter's value resourceGroup().location is a built-in Bicep function you can use to get a hold of the resource group's location to use it while provisioning other resources under that group.

The output keyword allows you to capture artifacts created by resource provisioning and easily share those values with the rest of your bicep files. Very useful for connection string and configuration values where downstream resources depend on those values so they can be successfully provisioned.

In this case, the appPlan.idof the creted App Service Plan is output value.

Returning to the main.bicep file, it's time to provision the App Service

Most of the syntax and values should look familiar by now. Note the use of the appSerivicePlan.outputs.planId from the output keyword in the appServicePlan.bicep file. This is an example of downstream resources relying on provisioning artifacts from earlier resources... aka, you need a way to tie the App Service to an App Serivce Plan to create it.

Create a new file called appService.bicep in the same directory as main.bicep with this code

Most of the syntax should be familiar by now. Note the use of a default value for the location parameter and the use of the output parameter for the siteUrl of the created App Service.

Now that all three files are ready, what can we do with them?

Building an ARM Template with Bicep

Open up Visual Studio Code and open the directory where you saved your bicep files (main.bicep, appService.bicep, appSerivcePlan.bicep) 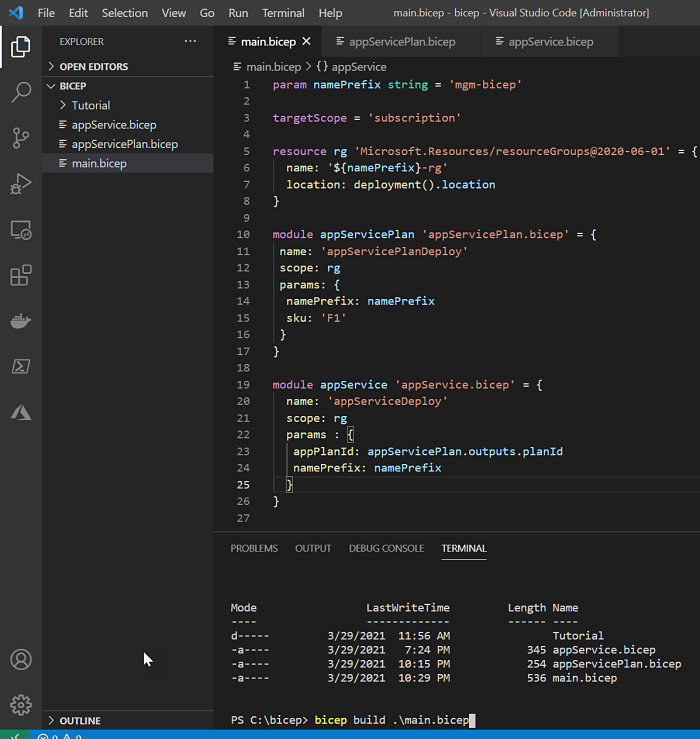 Then type the following command in the terminal.

You should see a main.json file appear in the Explorer window. For brevity's sake, I'm not going to paste the output into this blog post, but my transpiled ARM template came in at 137 lines long. The main.bicep file is 26 lines long.

The ability to encapsulate pieces of provisioning logic into separate Bicep files along with Bicep's much more terse syntax make it much easier to work with and understand than ARM templates.

To deploy resources to Azure, we'll use the Azure CLI via the Terminal tab of Visual Studio Code. 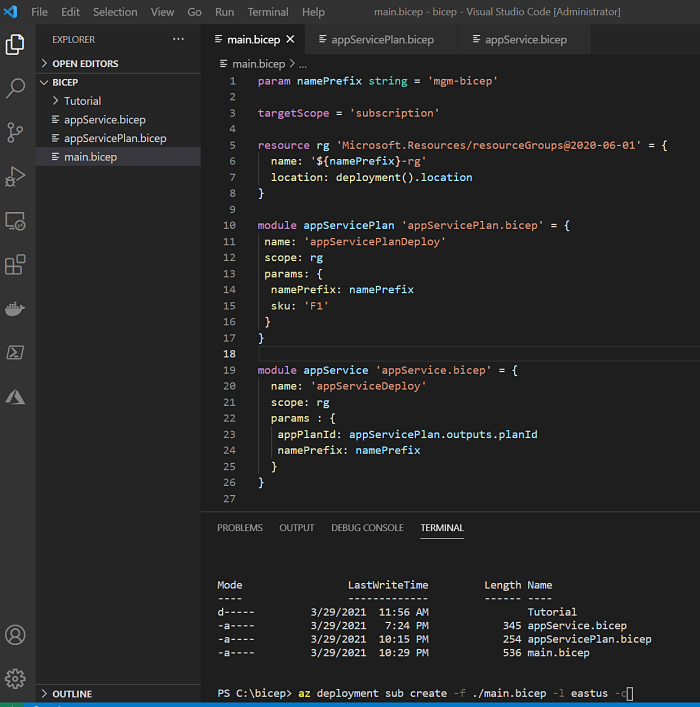 Navigate to where you saved all three of your bicep files (main.bicep, appService.bicep, appSerivcePlan.bicep) and type the following command in the terminal, replacing -l eastus with the location nearest to you.

The output in Visual Studio code will show you what will be created if you answer answer y to "are you sure you want to confirm this deployment?" Go ahead and choose y 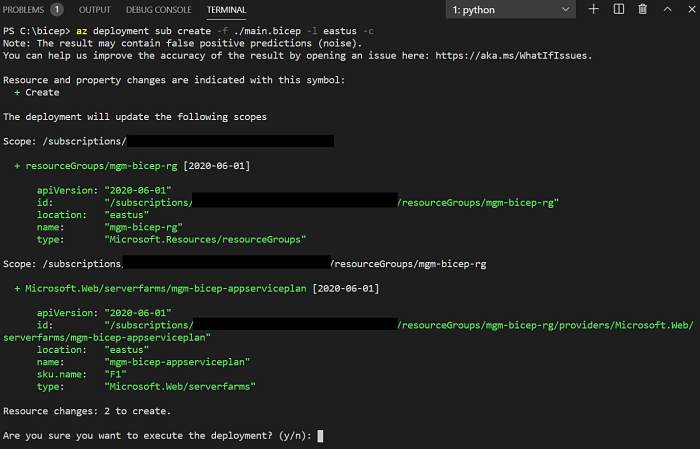 When the deployment is finished log into your Azure Portal to take a look at your newly provisioned resources (and, don't forget to clean up).

This blog post introduced you to the capabilities of Bicep, but I've barely scratched the surface. A great video introduction for Bicep is available via Microsoft Docs Bicep Overview page. Also an excellent Beginner Bicep tutorial is available here.

Although it's still in preview, Bicep is already gaining incredibly momentum and I wouldn't be surprised to start seeing more tooling, first class Azure DevOps support and other "services" spring up around Bicep. 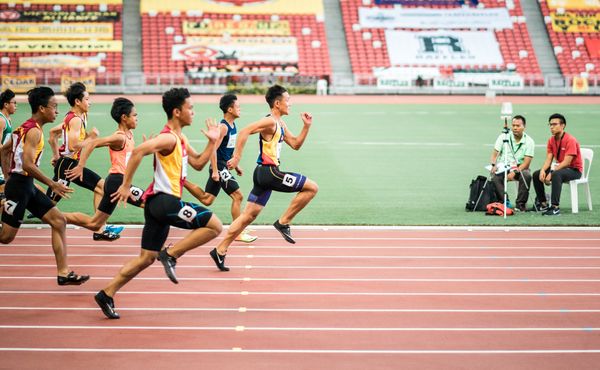 The days of "chasing absolutes" in programming and in business are at an end. They no longer work in a distributed world. The business world rewards speed and flexibility over absolutes now. 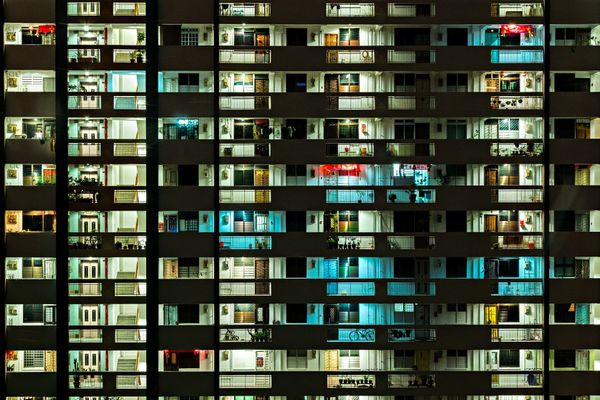 In this blog post, I'll illustrate the harm that service-to-service communication over HTTP can cause in a microservices architecture and offer an alternative approach to sharing data in a distributed system.